As the weather wasn’t exactly giving it’s best for a walking tour around the city this morning, we decided to have a lazy morning for a change. Later on, as the weather seemed to clear a little bit, we decided to head to see a proper touristy spot on the Costa del Sol – Fuengirola!

Fuengirola, a major tourist hotspot of the Costa is home to over 72000 people, making it a town on its own right. Out of the population roughly 25% come from other countries and have set their roots in the Fuengirola area. But even if you are coming here for the Sun, Sea, and Sangria, there is still plenty more to do: Fuengirola’s history is deeply connected to that of the rest of Andalucia, and they can boast having their own Moorish fortress!

Travelling from Málaga towards  Fuengirola is perhaps easiest done by a train. The cost for one way ticket is 3.60€ per person, which really is quite affordable. If you are staying in the area for longer and are planning to use the train more, there is also a monthly ticket available. RENFE website has more information about the tickets. Also, for the price of the ticket you get to use the free WiFi which saves you some of the precious data for the moments when you really need it! HOWEVER, you do need to register to use their services on the first time, and it can be a bit of a hassle if you are just going to use the WiFi once, but if you are more frequent traveller, then the registration is worth it.

But as always when travelling – remember to take good care of your ticket! You need the ticket to enter the platform area, and again when exiting the station!

The ticket machines are surprisingly easy to operate, and if the size of the machine daunts you – just take a deep breath and keep clicking on the language button! After that, you’d wish that your home town’s public transport ticket machines were so easy to use!

The trains are neat, clean, spacious, and air conditioned. At least now, in winter season, they are not packed, but I can imagine the height of summer with all the tourists flocking to get to the sunny beaches along the Costa del Sol.

Where to start.. Obviously people come to Fuengirola area for the sea and beach, and we are no different. Even though the day is sunny, it is still very, very windy, so we decided not to sit at the beach, suntanning ourselves, as it would have resulted in having your skin peeled by the flying sand. So instead we decided to stroll on the beach boulevard, checking out sights and places along as we walked. As part of our trip here we wanted to try and find some of the companies we saw on a British TV program, but didn’t have much luck with that. Instead we found some delicious churros and then some nice evening meal at La Galería. Both of these places warranted their own posts as they are definitely places for you to visit. Too soon the evening came and before we realised it, it was already time to head back to Málaga.

One of the very important things to keep a track on are the train (or bus) times and especially when the services end, unless you have managed to secure accommodation or are going to party for the whole night until the first service in the morning! Also, one important matter to keep an eye on is the intervals, which usually are not as short as during the day time; during the day, the train interval is 20 minutes, but in the evening it is 30 minutes.

One good way of keeping track of the time is to save a photo of the train times to your phone, and then setting enough of the alarms to remind you when you should start to head back towards the station so you can catch up the train. Sleeping on the beach might get you in trouble with the local authorities, so we definitely don’t recommend it.

But when you have set all those alarms up and arrive to the station slightly early (try 20 minutes early as it was in our case) you have time to snap some photos that you otherwise wouldn’t. 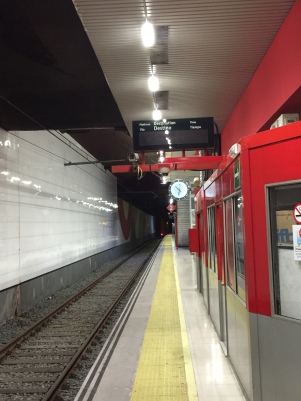 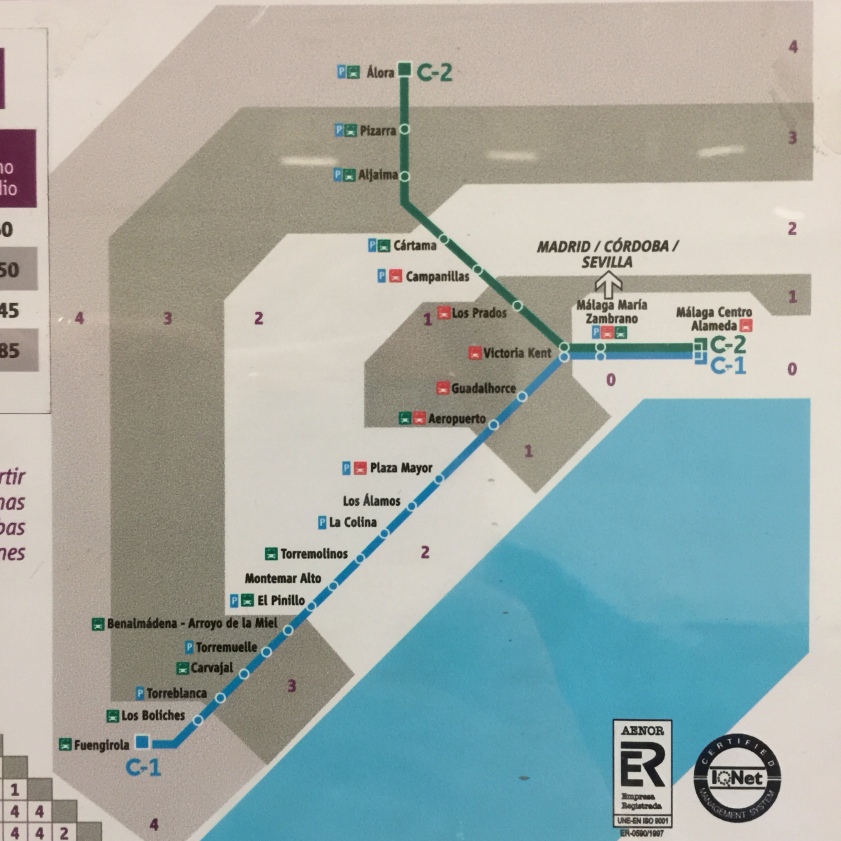 Still, having taken very early and very late metros and trains in places like the UK, London, and New York, I feel quite safe here in Fuengirola station, even though for the first ten minutes we were the only ones waiting at the platform.

However, when you are travelling to Malaga City Center, pay heed to alight at the end station, which is Malaga Centro Alameda. Malaga Maria Zambrano Station is by far bigger junction with connections to other parts of Spain by train and by the adjoining bus station, where we took our bus to Granada as well. Walking time from Maria Zambrano to Plaza de la Constitution is about 30-35 minutes, whereas from Centro Alameda Station it is only 20-25 minutes.

This site uses Akismet to reduce spam. Learn how your comment data is processed.

There was an error retrieving images from Instagram. An attempt will be remade in a few minutes.